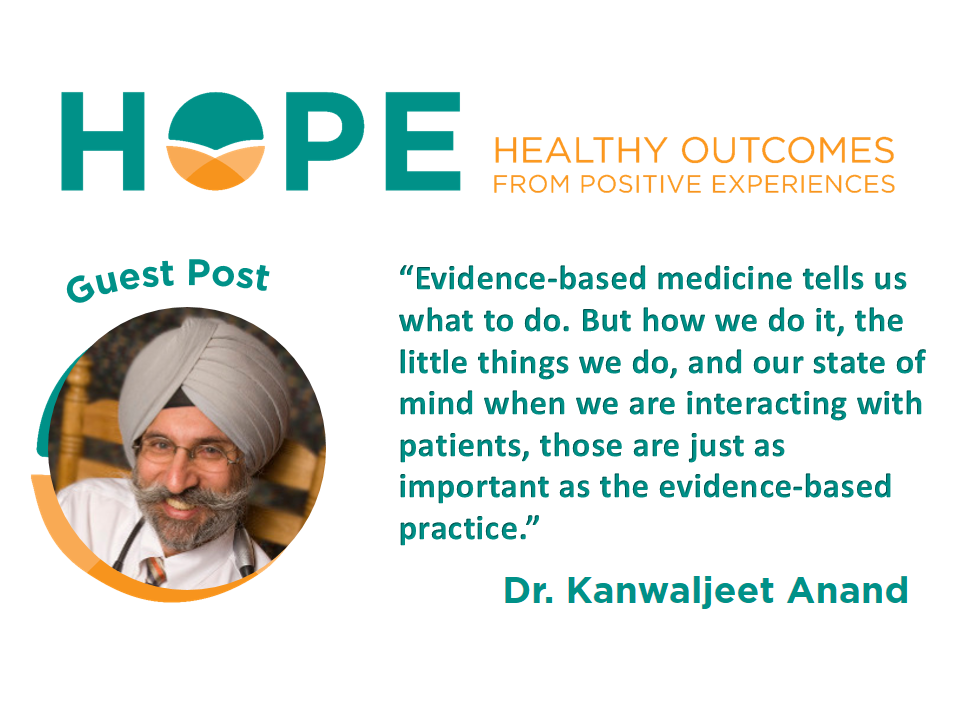 A growing body of work recognizes the important health effects of highlighting and creating positive childhood experiences. Today’s blog post makes the scientific case for this, based off of an interview with Dr. Kanwaljeet Anand, professor of pediatrics and anesthesiology at Stanford School of Medicine. Below, Dr. Anand details how positive childhood experiences buffer against adverse ones and explains the biological basis for this protective and healing affect. For more of Dr. Anand’s work, additional papers are provided at the end of this post.

Can you introduce yourself and your work for our blog readers?

My name is Kanwaljeet Singh Anand, and I’m a professor of pediatrics and anesthesiology at Stanford School of Medicine. I also direct the Pain/Stress Neurobiology Lab at the Maternal and Child Health Institute at Stanford, as well as the Jackson Vaughan Critical Care Research Fund. I got my D. Phil. (PhD) at Oxford on a Rhodes Scholarship, then came to Boston on a postdoctoral fellowship. In the end, my passion was underserved communities. On the CDC website, I saw the highest mortality rates for children in the country were in the Mississippi Delta region. I thought, “Maybe I can go there and help make a difference.” I stayed 22+ years in the Deep South, had the opportunity for various leadership positions, and built three critical care programs for children.

I realized that it was not enough to take care of critically ill children and make sure they get the right care, at the right time, in the right place.  In 2005, I attended an MPH thesis presentation, and the student documented that in 2004, 435,000 people in Central Arkansas were without insurance. They looked at the impact of this on various outcomes, including longevity, mortality, various diseases, smoking, and other lifestyle choices. I said, “How can we be living here in Little Rock, Arkansas, enjoying the good life, and there are people who are dying out there, right in our own communities?” I wrote to everyone I knew in our medical school.  We started setting up a free, charitable clinic. I wanted it to be a full-service clinic with free medical care, free dental care, health education, free pharmacy, free lab testing, free PT/OT and invasive procedures. It took a while, and in December 2008, we launched the Harmony Health Clinic. It was a full-service clinic, right from day one. That’s been up and going for the last 12 years, and I am still associated with the clinic and have continued to help others build these clinics elsewhere.

I spent 20 years looking at babies experiencing repetitive pain in the Newborn Intensive Care Unit (NICU) and wondered about the impact it has on their brain development. Babies who have repetitive pain, particularly the preterm babies, have delayed cognitive development. They were 2.6 times more likely to have attention deficit disorder and other behavioral problems. Our thought was that we could make the NICU a kinder, gentler place, not just through pain relief, but through social contact. I partnered with Nathalie Charpak to learn about Kangaroo Care, where we put the tiny premature baby between the mother’s breasts for skin-to-skin contact. Being enveloped in mom’s love is a positive experience. In the immediate term, it stabilizes their vital signs. In the long term, because babies have very high brain plasticity in those early days, the brains develop much better. Heidelise Als at Boston Children’s promoted the NIDCAP approach, to change the model of nursing care from protocol-based to relationship-based care, and that has improved NICU health outcomes.

I [remember when I] treated a baby with meconium aspiration, critically ill—this baby was terminally ill, in multiorgan system failure, on high ventilator settings and 100% oxygen. The mother said, “Can I just hold the baby?” An hour and a half into the mom holding the baby, the baby’s oxygen level improved and she had some urinary output. A week later—this was a baby who was almost dead—she was ready to leave the ICU. Numerous people have told me similar stories. This inspired me to write a commentary, published in Pediatrics, that was titled, “Love, Pain, and Intensive Care.” I talked about the scientific evidence for love, compassion, and social bonding, and how that has a positive outcome, at least in NICU newborns. That got a very mixed reaction. Dr. James Stockman, who was president of the American Board of Pediatrics, wrote to me saying, “This is exactly what I’ve believed for decades, but I couldn’t convince my colleagues that love and compassion matter.” I also got a few letters saying, “This is highly unprofessional. You have to be aloof.” Evidence-based medicine tells us what to do. But how we do it, the little things we do, and our state of mind when we are interacting with patients, those are just as important as the evidence-based practice. That was the main thesis of this article.

Can you explain the biology behind positive and negative experiences?

Any negative or stressful experience will activate a hormonal stress response, whether it is surgery, getting your vaccination shots, verbal abuse, whatever it is—we have a release of the stress hormone called cortisol. But then I was thinking, “There aren’t just negative experiences, there are positive experiences, too.” It took a while, but we finally developed the world’s first assay for oxytocin in hair, after I came upon research by Ruth Feldman. She found that oxytocin is released whenever you give your child a hug or encouragement of some sort. Both people will release oxytocin in the brain. You look at a playground: a child falls down, scrapes his knee, mom gives him a hug, kisses him, and within seconds, that child is ready to play again. What just happened? Their cortisol release was from the stress and the pain, people teasing that child, etc. A hug from Mommy increased oxytocin. As soon as oxytocin goes up, it completely turns down the stress response. Your cortisol levels go away like they weren’t even there.

Can you explain the long-term biology of positive experiences?

Childhood proceeds in a mixture of positive and negative experiences, and those positive experiences make it much easier to overcome the effects of negative experiences. Early adverse experiences increase our vulnerability to all the chronic diseases, substance abuse, sexual risk-taking behaviors, and even mood disorders. This results from changes that are happening in our brains and in our body’s tissues. Because oxytocin turns down the stress response, it not only decreases the duration and frequency of the negative hormonal and genetic, epigenetic changes, but it starts the repair mechanisms as well. Oxytocin is well known to increase cell division in the brain. Even in the adult brain where [neuronal] cell division cannot occur, it helps with new connections between brain cells. The executive control network of our brains, the prefrontal cortex, allows us to judge things that are beneficial or harmful and make right decisions. The positive experiences help these healthy brains architectures get re-established. With positive experiences, [certain brain] connections start to rewire themselves. That’s the tremendous impact of positive experiences—they buffer against the effects of contextual stressors.

Social relationships are most important. You must have social relationships that are simply directed towards your benefit. If your only interest is in supporting and helping a child, then that is going to have a major positive impact. It doesn’t need to be the parent, it could be another adult who is kind, compassionate, has only the child’s best interests at heart—a grandparent, neighbor, church pastor, anyone. As the child gets older, beyond 7-10 years old, it could even be a peer. Kids who have very bad experiences, if they have a buddy in their school who they really connect to, those positive experiences allow that child to thrive, to become resilient and deal with everything else that life throws at them.

Can you share a story that demonstrates the healing power of positive experiences?

Dec 4, 2008, the very first day that the Harmony Health Clinic opened its doors, I was the only doctor at that time. We had one nurse practitioner, one receptionist, and there were a couple of other volunteers. This young lady comes in with a complaint of vomiting blood. She’s 36 years old and has 4 children. I thought she may have a stomach ulcer, and I was very concerned. I said, “Listen, any moment, you could get a massive bleed. What will happen to your children?” She was a single mom, working two jobs, getting [her kids] ready for school, going to one job. Then she would be back home, get them started on homework, go for a second job, come back, make dinner.

We got her started on some treatments. Our gastroenterologist found an ulcer on endoscopy and cauterized the blood vessels, everything eventually healed. Two months later, she had a lot more energy and no bleeding. In the follow-up visit, the two younger children came with her. I said, “Is your mom feeling better?” They said, “Yeah! She even plays with us!” It was so wonderful to see the positive experiences that were produced because we had been able to help this young lady, who was doing a phenomenal job bringing up her children. A couple of years later, [one of her children] had started community college, the second oldest was in high school, and she had started volunteering at the clinic. Here’s a mom, who went from pillar to post, and is now a giving member of that community. We can all give when we have plenty. But when you have very little, to give back is just phenomenal. [She was] recognized by the governor of Arkansas with a community service award, she got a much better job, and she was able to drop her side jobs. Her four children are probably much older by now. It’s been 12 years! A lot happens in 12 years, but that was one of the first patients that we saw at Harmony Clinic.

For more of Dr. Anand’s work on pain and brain development, as well as pain, anesthesia, and postoperative outcomes in infants:

Pain, plasticity, and premature birth: a prescription for permanent suffering?

For more of Dr. Anand’s work on developing a novel method for measuring cortisol in hair (oxytocin assay not yet published):

For more of Dr. Anand’s writings on love:

What is Love? Reflections of an I.C.U. Physician

This interview was conducted, transcribed, and compiled by Chloe Yang. Additional readings were provided by Dr. Anand. 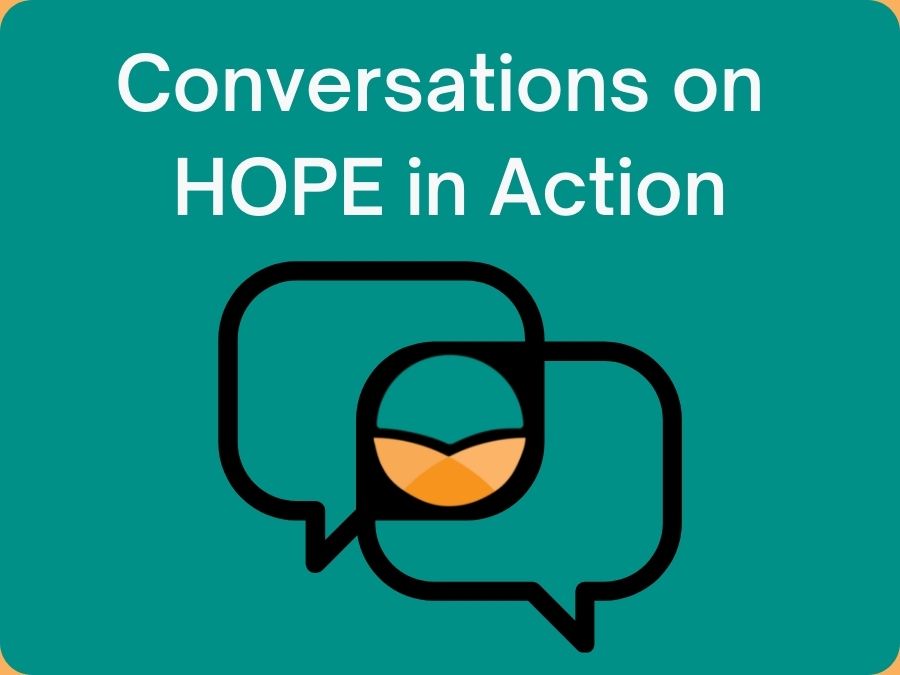 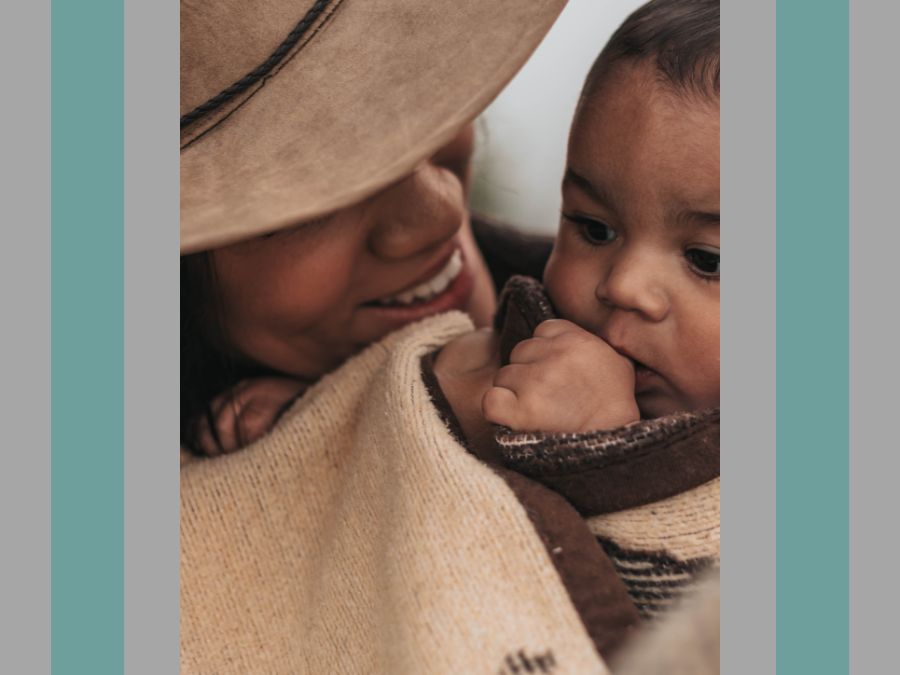