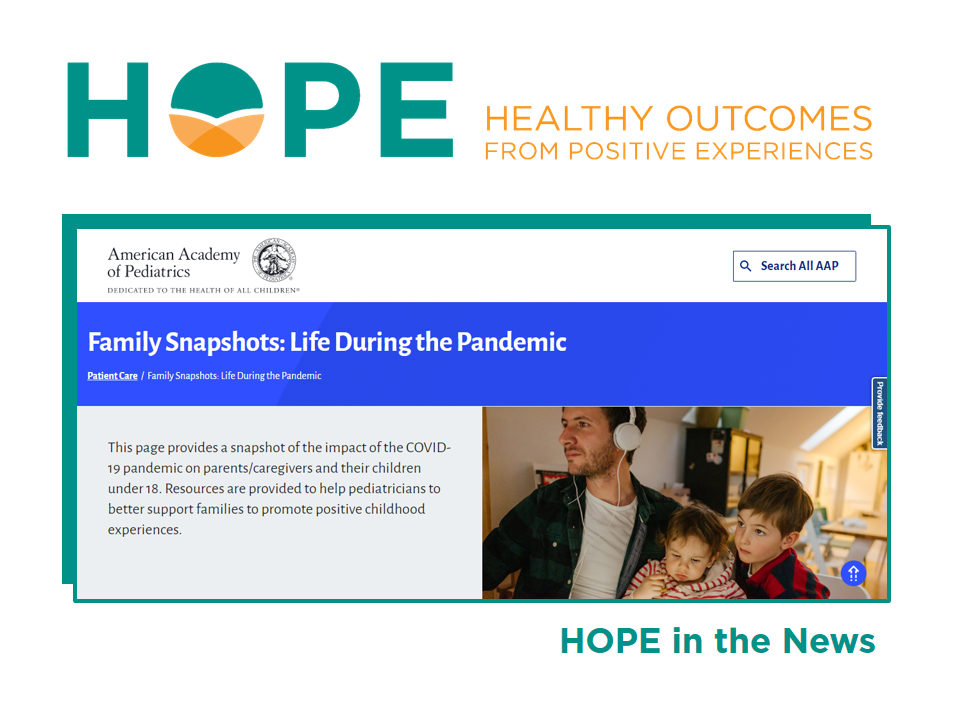 Our recent blog post discussed the American Academy of Pediatrics’ (AAP) “Snapshots,” the first in a series of reports that discuss the results of a nationwide poll of parents. The AAP highlighted that families were having positive experiences in general, and specifically that their relationships with their children were deepening. All of this happened despite the stress and tension happening at the same time. These results were picked up by Boston’s Channel 25, which interviewed Dr. Bob Sege on April 21st, and were also covered in AAP News, which reaches over 60,000 pediatricians with practical advice. Dr. Sege also had a Pediatric Perspective, Reasons for HOPE, published online in Pediatrics on April 20th. The perspective, created with the help of the HOPE National Advisory Board, goes into more depth about the resilience and adaptability of families in the face of the pandemic. These messages provide a needed counterweight to the all too real stories of family stress and dysfunction that often dominate the news. The piece calls on pediatricians to ask parents about relational health, and to cultivate a mindset that adds a focus on strengths to the common medical practice of identifying and addressing deficits, creating warm, welcoming environments for all families, particularly those facing additional challenges due to poverty and its many effects.

The editorial suggests that focusing on strengths supports an anti-racist agenda, offering policy suggestions that create more opportunities for positive childhood experiences for all children. The social and judicial events of late April 2021 highlight the need to keep working toward true racial justice. Community and police violence disproportionately harm Black children, denying them safe, healthy, and stable environments. Racial justice work is a central consideration for HOPE, as we aim for a world in which Black and other BIPOC children can grow up feeling community support and engagement, rather than fear and discrimination.